I wrote (among others) these plays. 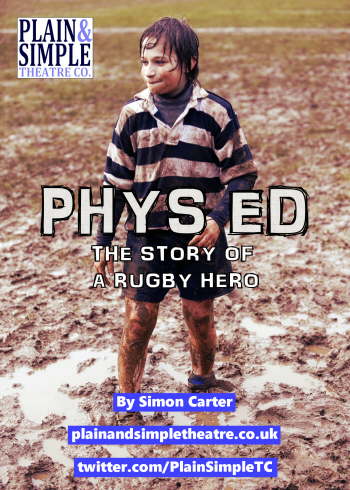 A brilliant one-man comedy play about rugby, underpants, King Arthur and the really hairy kid who was in your PE class. You know who we’re talking about.

Can Mr Trellis inspire his team of schoolboys to glory? Or will his arch-nemesis Smithers shatter his dreams?

Phys Ed’s triumphant run at the 24-7 Theatre Festival earned it a Manchester Evening News award nomination. It then went on to critical acclaim at the Edinburgh Fringe.

‘This clever, amusing and at times poignant piece is a real treasure.’  WHATSONSTAGE.COM

An insightful and moving one-man comedy play about love, loss and the afterlife.

Can reluctant apprentice ghost (and former window cleaner) Kevin settle matters with the love of his life before they call his number? Or will the idiots who run the National Death Service mess up the paperwork and condemn him to a ghostly existence forever?

Thomas has locked-in syndrome. His only means of communicating, the blinking of an eye, has deserted him.

Concerned only for his daughter Sylvia, Thomas discovers that the neurologist treating him has a terrifying past, an unhealthy obsession with his daughter and a most disturbing idea of what’s best for Thomas.

Fully aware and regaining limited mobility, can Thomas warn his daughter in time and save her from a monster?

Compelling and intense, Blink explores one man’s struggle to communicate, for the love of his daughter, against overwhelming odds.